It is never too late to change. If you are trying to get well the struggle is real. We have our jobs, families, favorite foods, and activities that demand our attention. It is hard to make lifestyle changes and some even use sayings such as, “well that’s the way I was raised.” It is easier to accept what is comfortable, and look for the magic medicine or pill to make it go away. But that is a dangerous attitude. There are no quick fixes. Many illnesses are a result of lifestyle, toxins, and trauma in our environment. Still, it is never too late to make changes even if we are undergoing medical treatments.

So where do we start? Many accept the mainstream answer that the increase in health problems are genetic. Granted, a small percentage are genetic, but that idea leads to a helpless viewpoint for many patients. It also keeps people dependent on prescription medications. Furthermore, today in the United States, our society is reaping the consequences of that behavior. The overuse of prescription drugs to solve physical symptoms is creating a big problem for healthcare. According to Mark Hyman, MD, “90 percent of chronic disease is driven, not by the genome, but by the “exposome,” or the build-up of disease-causing factors in our environments (p. 11, Beat Autoimmune, Kippola, P). It is nearly impossible to take in enough information to problem-solve our illness alone. Seek out professional advice from a Naturopathic Doctor, one who has earned an ND or NMD degree from a naturopathic medical school. He or she studies all the basic medical coursework an MD would study, plus nutrition, botanical medicine(herbals), and mental health studies like psychology or counseling.

Life trauma is another stressor that can add to autoimmune problems. In a report by Irwin G. Sarason, Department of Psychology, University of Washington, Seattle, report, Stress, Anxiety, and Cognitive Interference: Reactions to Tests, April 1982, test anxiety was analyzed with a new test instrument. The scales of the Reactions to Tests questionaire, (worry, tension, test-irrelevant thinking, bodily symptoms) compared intellectual performance and thought interference. The results were consistent with the idea that the problem of anxiety is mainly a problem of emotional thoughts interfering with thinking. Evolving research is revealing the connection between emotions and illness. “…Illnesses of the emotions, actually illnesses of the brain, are also imbalances of the many brain hormones that work together to produce our feelings” (p. 74 The Balance Within, The Science Connecting Health and Emotions, Sternberg, E.M. MD) So mental and physical health is a chemical response to our emotions, our environment, and our past experiences. Getting help when we need it, creating a less stressful environment, and eating healthy food will help our body maintain a healthy balance and improve our ability to enjoy life.

How could this be me? As I lay on my bed, unable to sleep because of the pain in my body, especially my joints, it seemed unreal that I was in this state.  I had been a healthy and active person, so how did this happen? Instead of going from work activity to more activity as I had for years, I lie on the bed or stumbled to the couch to read, watch TV, or rest.  My enemy was my own reflection in the mirror staring back at me.  I looked like a skeleton without hair; a broken doll that was beyond repair, but I knew that those images and thoughts could be my worst enemy.  I realized that this was a moment to re-evaluate what I was thinking and doing.  How we view the world and our situation is powerful. Our health is affected by the state of our body, our emotions, and lifestyle, and if we give in with a fatalistic mindset, cancer will eat us up.

First of all, I thought about my body.  I was getting older, and I felt like I was always trying to catch up.  I had fallen into the snack trap to keep my body going and to get the quick energy to meet deadlines.  However, most of those snacks are full of sugar or carbohydrates that turn to sugar.  Except for the quick energy boost, they are usually devoid of the nutrition that our bodies need.  Even though I had been overweight, now I was losing weight and not sleeping well. Even my digestive track had turned against me, or so it seemed.  I was afraid to eat and especially to go out and eat.  In addition, I was at a point in life where hormone changes were taking place.  To sum it up, my body was affecting my emotions and my emotions my body, and the drug treatments for cancer were adding insult to injury.

As one painful day blended into another, I knew that I had to take charge of my thinking.  A proverb came to mind, “As a man or woman thinks in their heart, so they are,” Proverbs 23:7.  In psychology, there is something called the self-fulfilling prophecy.  I did not want to fall in that negative pit. As long as there is life there is hope.  James 5:13- 15 says, “Is anyone of you in trouble? He should pray.  Is anyone happy? Let him sing songs of praise. Is anyone of you sick? He should call the elders of the church to pray over him or her and anoint him or her with oil, in the name of the Lord, (which represents the Holy Spirit), and the prayer offered in faith will make the sick person well; the Lord will raise him or her up.”  So I did go to the elders and they prayed the prayer of faith over me.  I chose life and healthy eating and thinking habits. In addition, this writer, Jennifer Delgado, has some good information on emotions and feelings, so check out her site.

What was going on in my body?  I suddenly felt vulnerable and uncertain. Like Dorothy, in the Wizard of Oz, I was spinning in a tornado, and when I awoke, there was pain near my stomach and back. I made an appointment at a local clinic, and after the check-up, I was given a prescription. Then I decided to read  the side-effects on the label, and they did not look good.  I was concerned, but I wasn’t sure what to do. Therefore, I thought it would be okay to try it for a short period of time, so I took the medicine. It wasn’t long before my digestive track was a mess, and I began to lose weight. 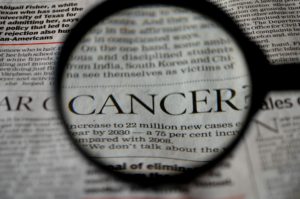 After the new symptoms appeared, I made another appointment with a different doctor, but the news was worse. The doctor thought it might be a lymphoma, a blood cancer, and it turned out he was right. This felt like a bad dream, and I was now more uncertain about what path to take.

Next, I decided to get another opinion from the Mayo Clinic to find out about new procedures involving immunotherapy. However, they told me that wasn’t an option for me. The doctors told me to start chemotherapy immediately or I might not live six months.  Discouragement and uncertainty was turning into fear.

In the end I gave in and started chemotherapy treatments.  As I received the treatments, my hair fell out, I lost more weight, and I became weaker and sicker. Would this nightmare never end? Here I was in a room filled with zombie-like people hooked up to bags of liquids and covered in blankets. I hated the bag with the unnatural red color. It was a bad omen. In spite of hoping the cancer would leave, now more than ever I doubted my choice.

As I thought about life, I remembered a story in the Bible about a man who had been robbed, beat up, and left by the side of the road. Even though two others walked by, they crossed over to the other side of the road and did not stop.  Finally a good Samaritan came by and offered hope. He picked up the injured man and carried him to an inn. The Samaritan told the innkeeper to look after the man, and he would reimburse him for any extra expense.(Luke 10:30-37)

Although I felt alone, more than one Samaritan saw me by the side of the road, and stopped. One of my daughter-in-laws gave me a little book by Dodie Olsteen, the mother of Joel Olsteen.  If Dodie had survived with a diagnosis of liver cancer, there was hope. Armed with Dodie’s positive scripture examples, I focused on healing.  In addition, another Samaritan, my daughter, showed me a book by Suzanne Sommers, and a program by Chris Wark (chrisbeatcancer.com). Survivors were sharing testimonies of hope, and I was on a new journey. https://thetruthaboutcancer.com/power-of-hope-cancer-patients-video/